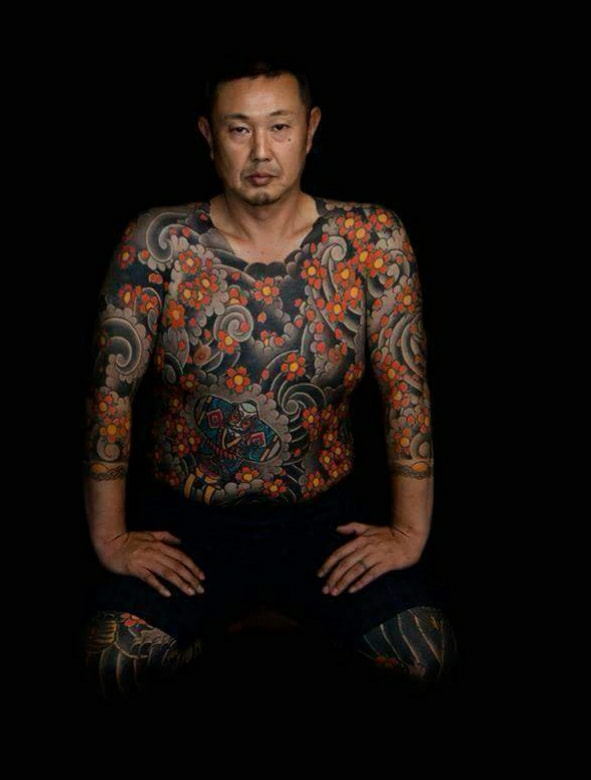 #Green n'Roll
Back to the future

David Cardoso from Nice has become in a few years the reference in the world of tattooing. Seven years ago, he added a string to his bow by joining the Yakuza brotherhood of tattoo artists, the Japanese mafia. A universe that does not admit mediocrity, which is sanctioned by the amputation of the phalanges.

It is a universe situated between light and shadow, both secret and ostensible. A shady universe closed to the uninitiated, a universe marginalized by the Japanese authorities, for whom the Yakuza are the dark and unavowed part of this nation which since the 17th century has chosen modernity.

But their truth lies beyond appearances and the role of the cursed that the authorities attribute to them, depriving them of the right to own property, a car, a simple bank account since the law of 1992. But their universe is on another scale, as explained by David Cardoso from Nice, who was admitted into their intimacy by becoming one of their official tattoo artists.

The itinerary of a Westerner in the yakuza world

Nothing predestined David Cardoso to become the student of Master Honda and Master Nakamura and to accept to enter a spiritual family and to become the son of the first and grandson of the second.

David’s story begins in Paris and Antwerp where he becomes a gemmologist, obtaining the highest diploma in the discipline in 2006-2007. But he is passionate about the Italian Renaissance, sculpture and incidentally, he discovered this art that is drawn on the skin, thanks to the tattooist Evgenyi with whom he went to train in Ukraine. Back in Nice he perfects his technique in a professional studio with a star of the profession whose activity takes place between Nice and Las Vegas.

C’est le hasard combiné à un goût très prononcé pour le Japon et l’irezumi qui lui permettra d’entrer en contact avec Master Honda, via les réseaux sociaux : “Facebook allows you to meet celebrities, I came across a profile written in Japanese with a logo, afterwards I knew it was the coat of arms of a clan. The person I was corresponding with and who liked my drawings and photos had been a student for 25 years.

He will understand very quickly that in the closed universe of Japanese tattoo artists, learning is a lifelong affair, just as he also understands that his mysterious interlocutor is none other than one of the masters of this art, Master Honda, student of Master Nakamura, former Boss of the Yakuza.

For more than two years David has been applying for admission as a student with Master Honda, but the answer is invariably negative. One day, the discourse becomes less categorical and the latter asks him about his motivation and if he knows the risks of joining the brotherhood: “He told me that he was going to ask Master Nakamura if he agreed to let me become an apprentice, and he added: but if his answer is negative, it will be definitively”.

One month later David flew to Japan and was welcomed at Maître Honda in Fukuoka. He will become a deshi, an apprentice tattooist and his observation time will last 6 months, during which he will be assigned to stewardship tasks, he will sleep on a tatami and once the household chores are completed he will obtain the right to attend from afar the Yakuza tattoos. Somewhat surprised by his presence, they questioned Master Honda and were intrigued by the presence of a Westerner at the side of the great Master: “being knighted by Nakamura, they accepted me”. But David twice comes close to amputation of the phalanx, a punishment reserved for those who have committed faults for failing to respect the etiquette and code of the Yakuza. What saves him is the intervention of a translator who makes his Masters understand that David does not master the language and codes of the brotherhood.

Brilliant draftsman, he learns quickly, even if the techniques of Japanese tattooing are not at all comparable to those in force in the West. At the end of his training, he will obtain the right to tattoo people in the Master’s entourage, because any mistake would be an affront to the latter. Once seasoned, he will take an oath to be admitted into the brotherhood which perpetuates the art of tattooing.

Tattooing, an art that is honored in Japan

Contrary to the West where the tattoo is unveiled, in Japan it is hidden and honored and David speaks of “Social Suicide”, because it is considered to be the prerogative of the Yakuza. It is in the 17thcentury under the Edo dynasty that the prisons mark the bandits, thugs who fall into the hands of Justice with an indelible mark, in order to be able to follow these criminals once they return to life in society Translated with www.DeepL.com/Translator (free version)

But the Yakuza, thwart this will of marking by drowning it under the tattoos which since then is part of their identity.

David will be invited to tattoo the clan chiefs, but also the henchmen: “the irezumi is done on the whole body and it is the Bosses who choose the motifs for their men whom they consider as their children, according to their personality and their qualities or defects”. The themes are borrowed from the Shinto religion, Chinese tales and legends with a predilection for the story entitled “at the water’s edge” which retraces the adventures of 108 brigands.

David knows that he still has to learn and even though he now masters the techniques, working with needles remains one of the most delicate aspects of this art. From now on he belongs to this universe that the Japanese authorities want to forget and would like to wipe out of society. The point of view of the population is much more nuanced because the yakuza have a code of honor, the Ninkyodo, which requires them to help their fellow man. David reports that the clans, after the tsunami, came to the aid of the population faster than the State. Translated with www.DeepL.com/Translator (free version) “I also remember a somewhat surreal conversation between my Master and a Boss who had come up with a list of necessities for children to buy after the tsunami. He asked him where he could find baby diapers.

Just like the Yamaguchi-gumi clan, which had opened a site where it threatened reprisals against drug dealers if the latter were to sell drugs to Japanese youth. But nothing coming from the Yakuza could find favor in the eyes of the Japanese authorities, so the site was closed. It is difficult to accept help from those who are considered the outcasts of a society.