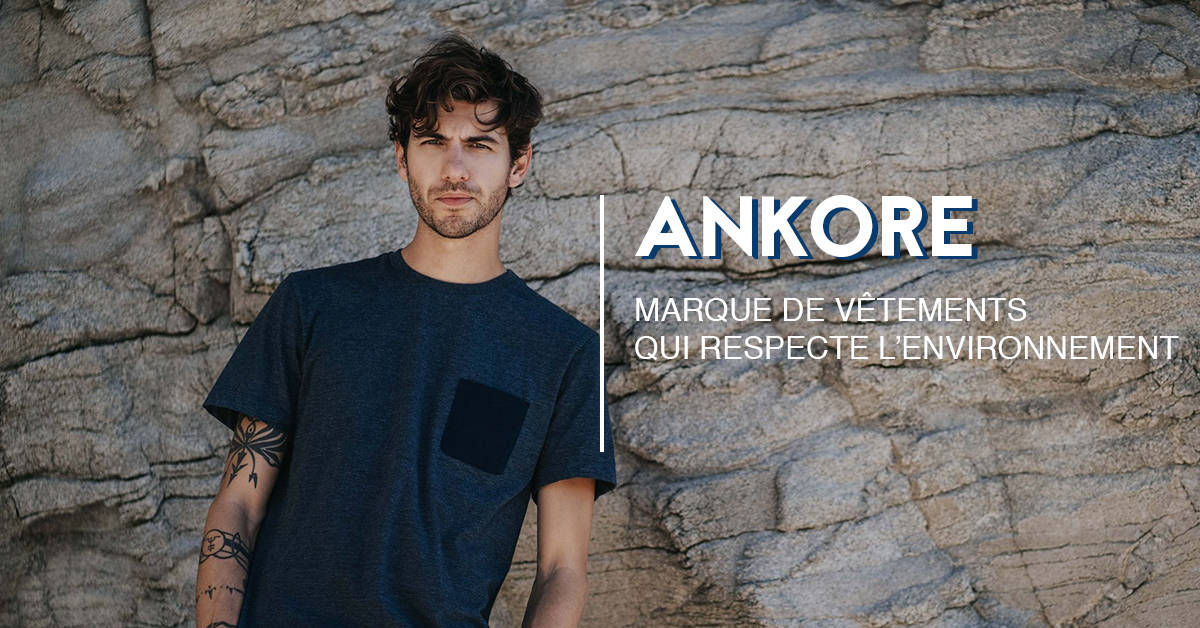 Lola Moy et Romain Durand (Ankore) :”The pieces we are going to propose are timeless”

Recycling plastic from the oceans to make clothes, that’s what Ankore, a company founded a year ago by two Breton, Romain Durand and Lola Moy, is launching. These two young entrepreneurs are keen to promote an ecological model with the aim of producing in the most responsible way possible and innovating in this sense. Interview.

Feat-Y : What are your backgrounds ?

Romain Durand : My name is Romain and I am 30 years old. After a DUT in management of companies and administrations, I worked in several different fields, as a customer advisor, in the restaurant business, etc. After a few years, I went back to school with a Master 2 in social law. Then I worked in Nantes as a lawyer. As time went by, in my head and in Lola’s, a project started to mature.

Lola Moy : My name is Lola, I am 29 years old. I have a master’s degree in psychology and a master’s degree in human resources. As a student, I also worked in the restaurant business. With Romain, we had set up a seasonal business for 3 years to finance our studies. I then worked as an HR manager. We have not at all a background of clothing designers!

Romain Durand : While we were working at our respective jobs, we started thinking about a project in ecology and environmental preservation. Several months later, we decided to leave our jobs to create ANKORE.

Feat-Y :What convinced you to co-found Ankore and how long has it been around?

Romain Durand : We are very concerned by the preservation of the coastline. We started, on our small scale, by cleaning beaches that we saw more and more polluted, year after year. We wanted to go to a higher stage and develop a project that had more meaning. We liked our respective jobs but we still had this idea in the back of our minds. We thought about different types of projects. I’m a surfer, so the ocean has always been an important part of our lifestyle. It was Ankore that stuck.

Lola Moy :I am self-taught in sewing. It is a passion. With our two strengths and our commitment to the climate emergency, this is what seemed most relevant. Ankore’s legal structure exists since May 2019 to allow us to work with our partners.

“We speak to people who are concerned about the planet, ocean preservation and the climate emergency. At the age level, everyone can recognize themselves.”

Feat-Y :What does your brand offer and who are you targeting?

Lola Moy : We talk to people who are concerned about the planet, the preservation of the oceans and the climate emergency. In terms of age, everyone can recognize themselves. We have had comments from 18 year olds and 50 year olds who say that they like our project a lot. Afterwards, what we are defending is rather a virtuous model. What we want to do is a short circuit. We work with a workshop in the north of Portugal. We are 1,000 kilometers from them. The goal is to have the smallest possible carbon footprint. Not to multiply the round trips because everything is done in this workshop. We have centralized everything, whether it is the labels, the ribs. Everything is really done in the same place. With of course the best possible working conditions. What we really want to do is reuse what already exists, rather than recreate something. The plastic is fished out of the ocean. It is then cleaned, crushed into flakes, melted into beads and finally transformed into yarn and mixed with organic cotton to obtain our clothes. The idea is to move from a productivist model where the only goal is mass production to an ecological model where the goal is to preserve the planet. The pieces we propose are timeless. The goal is not to multiply the number of collections, but to focus on what we produce now and to have clothes that are sustainable. You don’t need 10 sweatshirts in your wardrobe that are going to wash out and fray. That’s more what we’re working on. A thick weight, a resistant knit, colors that last, solid ribbing. These are the details that make the difference.

Feat-Y : You’ve answered it somewhat, but what materials do you use for your recycled clothing?

Lola Moy : We use recycled polyester. Plastic recovered from the oceans and organic cotton. It makes for a strong and super comfortable knit.

Feat-Y :You are launching a campaign on the Ulule platform. What would be the objective for your brand through this campaign?

Romain Durand : For the moment, we would like to sell 200 pieces, but we don’t really have a sales target. The goal of the campaign is to make a real test. We already see that there is a curiosity and an interest for our initiative. There is a dynamic that is created, we see it on the networks and with the people we talk to. The fact of liking the brand is one thing. Buying a garment is another. It will allow us, even financially, to produce the necessary quantity because it is the system of pre-sales that allows us to finance this. It also allows us to avoid overproducing and to see, in the short and medium term, the popularity of the campaign. And if the campaign works really well, we already have lots of ideas for new models, new materials.

Feat-Y : Are you considering partnerships with sewing companies in France and elsewhere in the world? Is this already the case?

Lola Moy : Currently, we work with a workshop in Portugal. In the future, we intend to look for the best workshops according to the products, always with an imperative of short circuit.

Feat-Y : What goals have you set for the year 2020, or even the entire decade?

Lola Moy : So 2020, the goal is going to be to succeed in the campaign. Over the whole decade, it will always be to innovate, to look for new ways to produce even more responsibly than what is currently happening on the planet.

“We’re pretty naturally optimistic and we think there can be a collective surge, because it takes the collective to make it work.”

Feat-Y Do you think that the current economic situation will accelerate a restructuring of fashion towards recycled clothing, like what you propose?

Romain Durand :This is a big question. There are two possibilities after Covid-19. Either everyone goes back to doing what they did before, with the old habits, or there is a collective jump. We are naturally optimistic and we think that there can be a collective awakening, because it takes a collective to make it work. We can consider this as an alert before it is too late for the planet. I think that something good can come out of an event that is dramatic at its core.

Lola Moy : I think that this crisis has allowed many people to open their eyes and realize that, finally, we are bad for ourselves and for the planet. When we see the decrease in greenhouse gas emissions, the animals that are coming back, I think that people are going to have an awareness. At least, we hope so!

Romain Durand : It’s more like a short film that must be 30-40 minutes long, it’s Under an Arctic Sky by Chris Burkard. It’s a film about surfing, about travel. The images are magnificent!