Home » Fempo: Women back in power 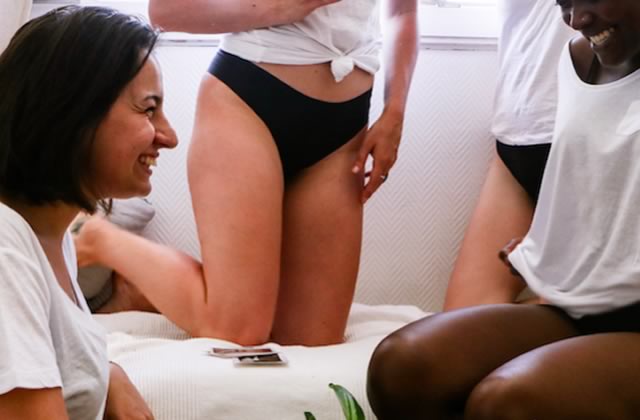 Claudette Lovencin: “Our goal is to make something ultra-comfortable”.

Making reusable menstrual panties is a project promoted by the Fempo brand since 2017. Claudette Lovencin, co-founder of the brand, tells Feat-Y about the motivations for producing menstrual panties, to strive to make them elegant enough for women to wear them during their period and thus positively change the relationship that women have with their private parts. Interview.

Feat-Y: What are the origins of the foundation of Fempo? Does the name you have given to this brand have a special meaning?

Claudette Lovencin: To answer the second part of the question, Fempo has a special meaning. It is the contraction of two words; woman and power. That’s what we’re trying to infuse in Fempo, the idea of regaining power, of having full possession of one’s body, of understanding it, and of making sure that one can move forward. This project was born in 2017. I started Fempo with Fanny Abes. We’ve known each other for about ten years. We met in Canada and a few years ago I came to Paris to complete my studies. We immediately got back in touch. We said to each other “it would be really cool if we started a project together”. We had subjects in common that interested us. Me, more about women’s health, how to help women take care of their bodies. Fanny is more focused on independence, leadership, advancement. Translated with www.DeepL.com/Translator (free version) We came across the subject of menstruation a bit by accident, because of a trained community, and the beginning of women’s awareness about menstruation, about periods. And above all, on the toxicity of disposable products which was becoming more and more visible in the media.

Feat-Y: What prompted you to turn to the production of menstrual panties?

C.L: We thought it would be good to check whether this problem is real. We launched a survey on social networks by asking women how they experience their periods. Quite quickly, we had almost 3,000 people who responded, telling us that there was indeed a problem, that they did not experience their periods at all well in relation to the products they used. That it was high time to change, from a disposable protection point of view. What they pointed out to us was that it was not at all comfortable, that they were afraid for their health with regard to toxicity and that they had an ecological conscience, and using products that they threw away every month, generating a lot of waste, no longer suited them. It was in view of these comments, these returns, that we tried to develop something that could be ultra-comfortable, safe for health and sustainable, with a lesser ecological impact. The menstrual panties is a modern solution to these three problems. We knew that there were other existing products on the market, partly meeting this demand. For example, the menstrual cup, which is a sustainable product, with less impact on health, but which is not at all accessible to all women. We also have everything that is washable towels, which can also be an ecological product. Since it is washable, it can be used several times. It doesn’t generate much waste. In terms of health, if it’s with good fabrics, it can also be an alternative. On the other hand, many women explain that it is not a comfortable product because it doesn’t take away the notion of having something besides the panties. On the contrary, it reminds us that we have our period and it’s a product that must be changed several times a day. What was on the market, at that time, couldn’t meet these three demands. I already knew about the menstrual panties because it was starting to happen in North America. I am from Canada. I thought, with Fanny, we can do something in that niche and offer the best product possible.

Feat-Y: What materials do you use for your menstrual panties and swimwear and is it ecologically sustainable compared to disposable protections?

C.L: Compared to disposables, it will always be sustainable as it is a product that you use several times, even for several years. It all depends on the number of panties you have and the turnover you make. As for the fabrics, I’ll explain quickly. You start with the inside, which is in contact with the skin, which is 100% cotton. It is the first tissue that touches directly the mucous membranes. Then we have a material that comes to absorb, made with bamboo, which absorbs. There is a fabric that avoids leaks, so it is waterproof. And the outside, depending on the model, is often nylon, as we know it in normal underwear. What’s important to remember is that from the outside, it really looks like typical underwear. Most people tell me they don’t see the difference. That’s what we’re trying to do. It’s trying to get closer and closer to a product that looks more and more like lingerie so that women can have something beautiful to wear during their period. Afterwards, for the specifics in the composition, I invite you to go to the site where there is a FAQ where they explain precisely all the materials, how they are made, the percentage, etc.. For those who want more information, they can write us directly. We are always very open to all those who write to us and have specific questions because we know that in some cases there may be problems related to allergies. Some women are very aware of what they use.

Feat-Y: What feedback do you get from your customers?

C.L.: We’re getting super positive feedback! When we started, we created the first prototypes and asked women to test them and give us their feedback, so that we could constantly improve and create something that would suit as many people as possible. We continue to survey clients and ask them questions. As I said earlier, there is a team that answers questions, that makes sure that the product continues to meet expectations. Overall, it’s very positive. Often women tell us, “You’ve literally changed my life. You’ve changed my relationship with my period. I think we’re on a very good track here. We’re trying to keep it that way, with the clients, to offer the best product possible.

Feat-Y: What development strategy do you plan to pursue in the future? Will it be focused on made in France?

CL: The overall strategy remains the same, i.e. to offer the best product. To do this, we need to have the best fabric, a garment that is becoming more and more like lingerie. Our goal is to make something ultra-comfortable, beautiful, so that a woman can wear it during her period and even without menstruation. Our strategy is not necessarily a made in France strategy. And we are very explicit about that. We seek to develop partnerships with the best people. Not necessarily on the basis of the company’s nationality, but on the ability to offer the best products and be a long-term partner. For companies starting out, we know that it’s complicated to be taken seriously, to find people who will be stable and who will want to grow with us, who are able to grow with us. Today, we are trying to find regional partnerships. The fabrics we use come from France and Italy. The manufacturing is done in Europe and the Maghreb, because that’s where our first partners joined us. They are trustworthy people who agreed to work with two people who knew nothing about the sector, on a new brand with a new product. We keep these partners and this is the basis on which we will continue in the coming years. It’s who does the best job, who is able to offer customers the best products at the best price, with the expectations they have.

Feat-Y: If you were a historical figure, who would you be?

C.L: I still have difficulty with this question. I don’t know. I can say that I admire characters who try to change the world on their own scale, who don’t take themselves seriously, who are close to people.

Feat-Y: If you were a plant, which one would it be?

C.L: I think the plant I have often been compared to is the cactus. Solitary, with small thorns, more to protect itself than to hurt others, which doesn’t need much to live in a quiet corner, in the sun.

C.L: The first one that comes to mind is “Survivor” from Destiny’s Child. I especially like the first line”I’m a survivor/I’m not gonna give up”. I think that describes me pretty well.

C.L.: I see myself through the lens of the pink flamingo. An animal that is both solitary and in a group. It’s rare to see a pink flamingo alone. It’s often in a flock, but it can also spend time alone, quietly, without making waves.