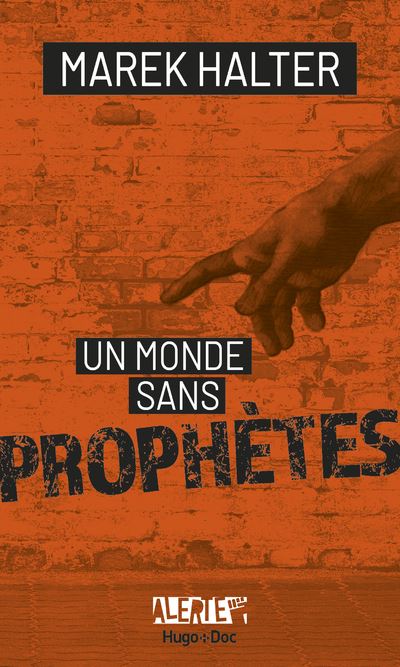 He burst onto the literary scene in the 1980s with a best-seller, “The Memory of Abraham”, which recounts a human epic by seizing the thread of history. In thirty years, Marek Halter has become the writer of memory, working with his wife Clara, on interreligious dialogue. He has just published a book entitled “Un monde sans Propètes” (A World Without Prophets), but it is to the women, prophetesses and central figures of the monotheistic religions that he has paid homage by devoting numerous works to them.

FEAT-Y: You have honored the women of the Bible in “The Feminine Bible”. Women play a secondary role in all religions. How do you explain this? There is only one woman imam, Kahina Bahloul, four women rabbis from liberal Judaism, several women pastors, and nothing from Catholicism.

Marek Halter: Your question is pertinent. Indeed, at first sight, women play a secondary role in the great religions. But I say “at first sight”. We must take into consideration that it is men, often misogynists, who have chosen and compiled these texts centuries after their writing.

Let’s start at the beginning. With the creation of the world. We are in paradise, with a man, Adam, a woman, Eve, and their two sons Cain and Abel. In Genesis, two passages argue, within a few pages of each other, about the origin of these first human beings. One maintains that the woman came out of the man’s rib, because he was bored alone. The other simply states: “Man and woman, He created them”. Equal, therefore.

Then there are trees in this place whose fruits are forbidden to them. Who of Eve or Adam dares to defy the ban, out of a desire to know the world, the destiny of his fellow men, God? Contrary to what one might think, it is not Adam, but Eve. Man is not curious.

And if women occupy positions of responsibility, if they can now assert themselves in the society in comparison with men, it is because another woman, hundreds of millions of years before you, wanted to know. Without Eve, no school, no university, no books… In short, no knowledge

From this simple observation, I reread the Texts. And I discovered that women have played an essential role in the evolution of humanity. Hence the trilogy I devoted to the women of the Bible (Sarah, Tsippora, Lilah), to the women of Islam (Khadija, Fatima, Aisha), to Mary, to the Queen of Sheba, to Bathsheba, and so on.

It is true that the clergy has not given women the place they deserve. Perhaps, as you point out, because of an alleged impurity? On the other hand, there are many women among the prophets or political leaders, and of great importance: the prophetesses Deborah and Houldah, for example, or Judith, Ruth, Anne, Mary – whose word was, in fact, reduced in the texts by the Evangelists, but rehabilitated by the Koran. Without forgetting the essential female figures of Islam. And the many queens who played a role in the elaboration of laws and the organization of society, in modern times, of course, but also in the Middle Ages.

If to this day you can only name one woman imam and four women rabbis, it is because, in the meantime, religion has given way to political and intellectual protest movements. I am naturally thinking of Louise Michel (in this year of commemoration of the 150thanniversary of the Paris Commune), Marie Curie, the philosopher Simone Weil, Hannah Arendt, Simone de Beauvoir or, closer to us, the politician Simone Veil.

FEAT-Y: You have indeed devoted a trilogy to the women of Islam, but curiously only one work to one of the women who played a role in Christianity: Mary of Nazareth? Why is that? Is it because she was a Jew and that she finds her place alongside Lilah and Tsippora? When will we see the women of the Gospels?

Marek Halter:Indeed. Anne, Mary’s mother, and Mary Magdalene would also deserve a book each. But there is not enough time.

FEAT-Y:There is Hypatia at 4th century, a Christian woman, murdered because of her progressive ideas. Do you think that women, if they were to accede to religious functions, could be a bulwark against fanaticism?

Marek Halter:I am convinced that women will play an increasingly important role in the future. Whether in religion, science, society or politics. There will be more and more women “opinion leaders”. Even if this insertion will probably be much slower in the churches, where, whether we like it or not, a thousand-year-old tradition weighs heavily. This does not prevent the different religions from paying tribute to women in their own way. Doesn’t the Catholic Church have as many female saints as male saints?

FEAT-Y:There is a feeling that the role of mother prevents women from accessing priestly functions, because it makes them impure. Is there not something contradictory in this vision of the role of women? Is childbearing a privilege that turns against women?

Marek Halter:You are right about religion. On the other hand, the role of mother favors women, and will favor them even more tomorrow, in their ascension to the political or economic affairs of the societies in which they evolve. Look at the number of female prime ministers or presidents today in Europe, Africa or Asia! I even believe, as in the case of Kamala Harris in the United States, that having children gives confidence to those who vote for her. Doesn’t taking care of one’s own offspring prepare a woman to lead millions of citizens?

FEAT-Y: Who is the woman in the Bible who seduced you the most, and why?

Marek Halter:Tsippora. A special character. Black of skin, daughter of Jethro, the High Priest of Midian, she saves Moses’ life twice. The first time, when Pharaoh’s police chase him, the second, when, having accepted the mission to free his people from slavery, he falls ill on the way to Egypt. But I admire this figure above all for the essential role he plays in the history of humanity, at the moment when the rules that still govern all constitutions are forged: the gift of the Law on Mount Sinai. By her activism, by her very presence, Tsippora provokes, as far as I know, the first debates on racism which was, at the time, predominant in the relations between humans. The Bible tells us that when Moses finally descends from Mount Sinai to the family tent where his brother Aaron and his sister Miriam are waiting for him, he receives complaints against his wife Tsipporah who kept the people waiting and who gave him confidence, she “who was not even one of them, and black to boot”. Moses protests. The discussion escalates. And God decides: Miriam, who expressed contempt for a person because of the color of his skin, is punished. She gets leprosy. And God reminds people that, whatever their background, He has created them in His image. Revolutionary!

FEAT-Y: Why did you choose Lilah, Zippora, Sarah etc.? And not Rachel, Miriam…?

Marek Halter:For one reason: lack of time. If you only knew how many projects I would still like to do!

FEAT-Y:In your latest book,A World Without ProphetsIn your book, you devote one line to prophetesses, but that’s about it. In your opinion, is their role not equal to that of prophets like Samuel or Jeremiah?

FEAT-Y:Can’t a woman be a whistleblower? However, Gisèle Halimi, Simone Veil and many others have played an important role in raising awareness…

Marek Halter:Of course I do. I do not forget the African-American activist Rosa Parks who, by her courage, reminded the American people of the condition of blacks. Not to mention, closer to us, the feminist demands of George Sand. Or the contribution of Rosa Luxembourg to the proletariat. Nor even Anna Polikovskaia and Nawal al-Saadawi…

FEAT-Y: How can we explain the near disappearance of prophets today? You compare them to whistle-blowers. In your opinion, can Assange claim to be a prophet?

Marek Halter:Good question. First of all, I must specify that, although I compare the whistleblower to the prophet, the field of action of the former remains categorical (or specific) and not global or universal like the latter. This makes him an incomplete prophet: he may have the prophet’s verve, or his charisma, but he does not cover all the fields like the true prophet. Personally, I do not believe that it is enough to break the rules, even unjust ones, to become a prophet.

The emptiness comes from the overflow, which is due to the proliferation of media and means of communication. Jesus had only twelve disciples. To begin with. In our time, any anonymous person, by launching his site on the Internet, would have more. It is possible that, in this hubbub that suffocates all understanding throughout the world, we will distinguish, one day soon, a cry. A cry that will carry us away. But, for that, our authorities should forbid anonymity. As Voltaire said, every individual has the right to express himself. But he must also take responsibility for his ideas and words. I am convinced that after the pandemic, when we rediscover our changed world, stunned by so much emotion or perhaps years of loneliness, we will find someone to give us hope. That will be the renewal of prophecy.