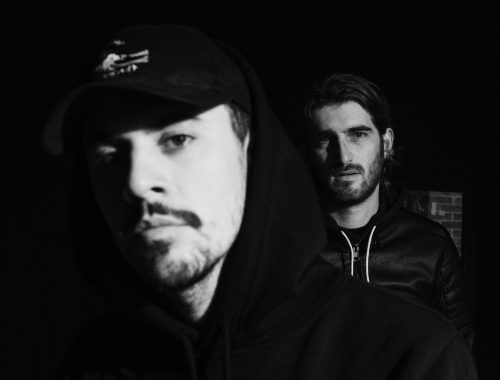 Feat-y:Your last title noir blanc is above all a human adventure, a symbiotic creation of a collective if I am not mistaken?

Johnson Carter : So no! Guillaume and I are not in a common collective, just in indie each one on our side

Georges Goeury : So no (bis)! The title is not a human adventure. It comes from it. We are friends who make music. We are often physically on the same path but our artistic paths are different, sometimes everything comes together.

Feat-y: Ok, behind this title, the team is heavy if I may say so, Clem beatz of Kitsuné, Dj skillz ( world champion dmc 2019), and you 2 of course, the idea to create this alchemical piece came to you in what way?

Johnson Carter: Clem beatz comes from the label “SansHuileDePalme” and not kitsuné (laughs), I started with him in 2011, at the time, we had a group together called “L’Eau Dans L’jazz”. It is him who makes all the prods on which I pose, it is him of course on “Blanc Noir” also with Guillaume.
Dj Skillz, 4 times world champion, 9 times French champion, he weighs a lot, I’m honored that he accepted and with pleasure to put his cuts on the track, he did the job, we let him free of course.
The idea came to me because if you really want the background of the story, I discovered Guillaume through another artist of our region “Fitzroy”, one of the precursors of Toulon rap. He’s a guy I respect a lot, I came across a track I liked, I added it to my contacts and it was the moment I released my track “I aspire” that I threw on the networks. He also liked my work and the connection came that way.

Georges Goeury : Well synthesized! We were following each other through our different outings on the networks without really seeing each other. Although we all knew each other more or less or by interposed relations. So once we actually met on a Sunday night in a sushi in town, we started to drink a few beers, It always ends up becoming the first stone of a project. Since we each make music on our own in varying degrees, it was obvious that we would find time to work on at least one track together. And music allows you to get to know people before you get to know them, it simplifies things. Skillz is the icing on the cake, (I started with 2 old Gemini turntables in the years… 2000 while struggling with all the intros of the tapes of the time of cut killer, cutee b and company. But as I never managed to get a proper crab (scratch) in, I quickly switched to rap and writing), so it’s an honor to have his little finishing touch. And a scratched #Hannn doesn’t have the same flavor haha.

Feat-y: Black White is an ode to music but also a note of hope, isn’t it?

Johnson Carter:“BlancNoir” is in reference to what we go through and feel in life in general, we speak of inequality often, of pain. We talk about the difficulty to have a conscience in a world that does not really turn round, in a world where the capital is king, beyond even the humanity which in my opinion is extinguished more and more. We tend to forget the simple pleasures that life offers us, that’s why I try more and more to realize the importance and the luck to be able to enjoy the present moment. “Black and White” is black moments and white moments, that’s life.

Georges Goeury : I don’t know if I’d say a note of hope because that’s what we’re all looking for more or less continuously and I don’t think anyone has found it yet (mdrrr.) It’s mostly the search for everything, from oneself to the other, from one’s place to theirs. The gap between how society perceives us and how we perceive society, while being fully part of it. It is paradoxical. We ask ourselves 2/3 questions and for lack of answers we have a piece. While waiting.

Johnson Carter: I’m clearly influenced by Akhenaton, and it’s funny because many people have already told me that even though I never tried to look like him. When you smoke a whole discography for so many years, you take a little bit of the person certainly.if I had to quote only one person it would be him without hesitation, he is an example for me.moreover one of my wishes would be to make a piece with him, #consécration (laughs)

Georges Goeury : As far as music is concerned, my culture has always been limited to French rap. I’ve heard a lot of US stuff but I could never talk about it because I’m not into it. So as far as influences are concerned, I’ll talk about the years 95/2000 in a not very original way because it’s from that time that I still listen to 80% of what I listen to now. Also friends from here who made sound when we were younger (AXP, Fatmess Crew) and whose tracks have greatly influenced my way of making sound. It is besides with AXP that I began my first tracks, at the time when we were much more in team. Now with everyone’s lives and schedules it’s easier to create alone, even if it’s still complicated lol. On “recent” artists, I put 3 of them that I’m jealous of in the good sense of the word: Veence Hanao, Sameer Ahmad and Josman. Although there are many more. It’s great.

Feat-y: There are real texts, real claims behind these melodies, do you consider yourself as engaged artists, what are your fights?

Johnson Carter :We are committed, completely, at least on our scale… Points on inequalities of any kind. Rap is an outlet for the pain we go through. If people can find themselves in our writings and can find comfort in the fact that they are not alone, it is a reward.

Georges Goeury : I don’t like to say “committed” and even less “committed artists” because I have a bit of trouble with the word “artist” used in a wrong way; and then “committed artist” can make you believe that you can humanly in everyday life not be. Music is just a reflection of you and fortunately it’s there to help you express a lot of things. It helps some who consume it and it helps those who produce it. The only fight is to love each other and for everyone to find their own balance, so to answer no I don’t feel like a “committed artist” but that’s just me.

Feat-y: What’s next for you two?

Johnson Carter: We’re supposed to do a piece again in 2089 😉

Georges Goeury : I’m currently finishing my Zut project started last year, and of course we’re going to repeat the experience with a new track with the small team of friends from here.

Feat-y: If you had to remember only one piece of music, what would it be?

Johnson Carter : If I had to retain a piece it would be: “My text the soap” of AKH

Georges Goeury : Cursed be the eyes closed. Straw dogs on the Taxi soundtrack:

Georges Goeury : Requiem for a dream (Darren Aronofsky). The scenario, the real, the soundtrack: everything is incredible. Don’t put it after a wrongful dismissal followed by a divorce and/or a death.

Johnson Carter : The pizza the base, not really a dish

Georges Goeury : Burrata. It’s not a dish but you put whatever you want with it and it makes an incredible dish. I never go out without my burrata.

Johnson Carter: In Japan, right away

Georges Goeury : If I had a place to remember, I hope it would be the right one.

Johnson Carter: I have nothing in mind ahah sorry

Georges Goeury :  I like everything that is shameful, it’s the only thing that stays in my head.