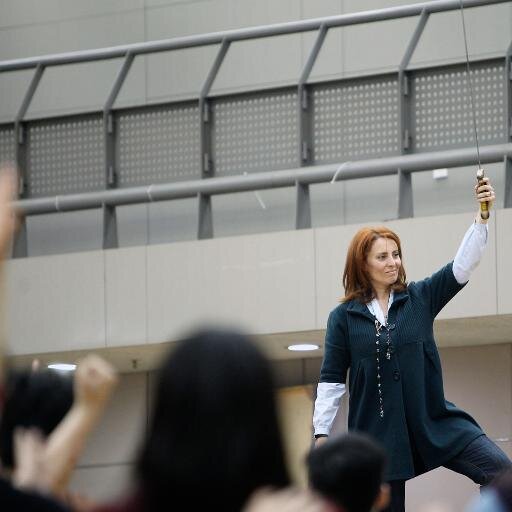 Sarah Schinasi has succeeded in imposing her name in the very closed universe of the opera scene. For more than twenty-five years she has been touring the world’s stages. She rehearses at the TNN in the Chat en Poche with Muriel Mayette-Holtz, a hilarious play by the scriptwriter Anat Gov. .

How many women claim the title of opera director? Very few in fact, because the opera scene is still predominantly male. However, the Anglo-Saxon world seems to be an exception to this rule with three directors who have reached the firmament of their art: Deborah Warner, Katie Mitchell and Fiona Shaw.

Needless to say, to succeed in this unforgiving world for women, it is necessary to show exceptional talent.

Italy has its own opera director in the person of Sarah Schinasi, daughter of the famous painter, father of neo-futurism, Daniel Schinasi. She studied in Tuscany, but also in London before directing the greatest operas in the world.

Ready to take on any challenge

Nothing stops her, and where some would see it as an obstacle, she bypasses it with cheerfulness and enthusiasm. The first confinement surprised her in Nice, but after the first days of dismay she called back the artists she was used to working with and organized opera-capsule. The program includes opera arias performed by the baritone Massimo Cavalletti accompanied by the pianist and conductor Eitan Schmeisser, Shalva Mukeria who interpretsRigolettoor Fabio Armiliato for Andrea Chénier, Ahinoa Arteta forAdriana Lecouvreur,Elisabeth Vidal in Rigoletto, Svetla Vassileva inTosca, Marco Berti in Turandot, Stephen Wadsworth feu Giuseppe Verdi.

This situation, although uncomfortable, amuses him: “We did fake live performances and we worked like crazy. In the end we presented a decent product, being all over the world. I was in Nice, the video editor was in Spain, the artists were in Italy or Israel or the United States. It was pure madness, but the situation was such that we had to keep moving forward. ”

Sarah Schinasi belongs to the category of fighters and her career path shows a strength of soul: “I began my musical studies at the Istituto Musicale Mascagni in Livorno. It was a ruthless world, because we were constantly challenged, it was strict and hard and the slightest mistake was punished”.

She will not do any and obtains a first prize of piano, but her interest goes to the theater and she imagines conciliating these two passions for the music and the stage direction.

The first steps in directing

She studied theater for twelve years: “when I was a child, I imagined myself on the stage, in the director’s seat”. Alongside her music studies, she obtained a Master’s degree in Dramaturgy at the University of Pisa, and then left for the Royal Central School of Speech and Drama, a great school for actors: “I learned acting there”.

But the place is conducive to beautiful encounters, those that allow her to advance in the path she has chosen: “I had as a movement teacher Milka Léon”who introduced her to the method intended primarily for actors and that she practices to direct her actors and opera singers, not without having improved it.

The actor at the center of his creations

It is the Laban-Bartenieff method which combines movement and breathing “before working on the text with the opera singers, we carry out a holistic work, the opera singers have a double challenge to take up, they must both sing and evolve on stage and the body becomes an instrument in its own right”. But she adds a dimension to the method by ensuring that the artist is built from the inside and the outside while leaving a margin, and above all allowing him to keep a certain distance from the work “so as not to be overwhelmed by the emotion”. The catalog of movements set up by the method allows the director but also the artist to make a choice according to the necessity of the performance and the character to be interpreted.

Another teacher and theater professional will be important, Rina Yerushalmi, whom she assists in workshops on Greek theater at the Old Vic in London, who practices the Feldenkrais method named after a soccer player and physicist who broke his knee and developed a rehabilitation method. This led Sarah to create her own method which she teaches at the Vocal Institute of the Julliard School of Music in New York.

On her return from London, she made her debut at the Nice Opera, where she worked under the aegis of Jacques Albert Cartier and Giancarlo del Monaco, who completed her training admirably.

Then the time came to fly on her own and Sarah travelled the world, directing in Beijing, London, Tel Aviv, Milan, Florence, New York

Her method for actors has made her a much sought-after director in the theater as well, “I like the idea that I can be asked to direct in the theater. As proof, she bought the rights to a play by the scriptwriter Anat Gov: a comedy about a depressed God who is forced to go to therapy to escape the blues that are taking over.

She chose as an actor for her play, the former sports journalist and actor Gérard Holtz who “although a layman, loved the text”, a bit provocative, “Oh my God!”, enough to satisfy Sarah Schinasi, who did not wish to change a line, faithful to her approach of the works that she leaves in the very spirit of their creation