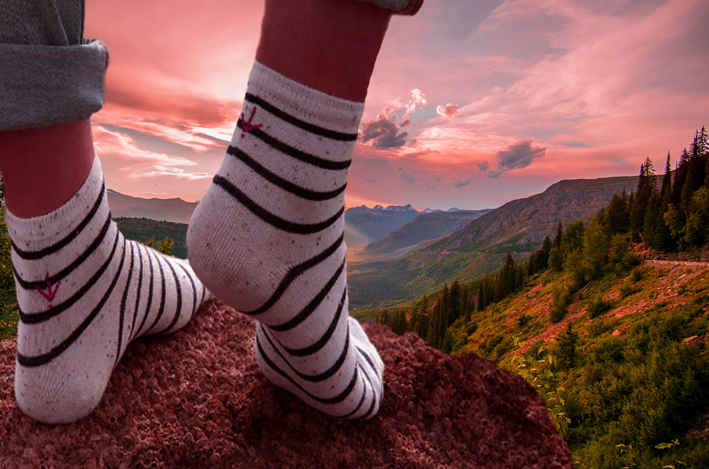 Alexandre Lucas: “It’s to show that another fashion is possible”.

Eco-responsible socks made in France? Alexandre Lucas, founder of Estampille, a brand of recycled socks launched a year ago, defends this line. In an interview with Feat-Y, the entrepreneur explains why he chose this business strategy in eco-responsible fashion and the future prospects of the brand, despite the context of confinement. Interview.

Feat-Y: Where did you get the idea to launch Estampille?

Alexandre Lucas : The idea came during my studies since I studied in the design of textile products in the field of sports. I learned the process involved in designing a textile product, from the cultivation of the raw material to the making of a garment, seeing solutions that are rather harmful to the environment, but also alternatives that were very little used a few years ago. I suggested the idea, as a bit of a joke, to some friends to create a sock brand to show that it was possible to change the textile industry, even by wearing socks. After that, I joined Pépite, which is an incubator for students or young graduates.

Feat-Y: What kind of materials do you use to make your socks, socks and pantyhose?

A.L: For the socks, it’s recycled cotton. Recycling is done in Spain. The cotton comes from old clothes, and in order to have a sustainable thread over time, we add recycled polyester, which comes from plastic bottles, to form a 100% recycled and sustainable thread. This yarn is then sent next to Limoges, to the Broussaud factory, which knits the socks. For the pantyhose, mainly recycled nylon is used, crushed to form yarn. These are knitted in the South of France, in Saint-Bauzille-de-Putois, near Montpellier.

Feat-Y: You recycle textile waste in Spain and then produce in France. How have you oriented your sourcing and processing choices?

A.L: The choice of made in France was very important for us. But unfortunately, when we launched the socks, there was no recycling plant, at least for cotton, in France. That’s why we turned to Spain, but it’s not surprising since Spain is still quite close to France, especially quite close to the production plant. It’s not an obstacle for us to go to Spain, even if it would have been better to have a 100% French product.

A.L: Simply by taking existing material, because cotton is present in all our clothes, but cotton cultivation is very energy-intensive, especially for water. It takes more than 5,000 liters of water on average for one kilo of cotton. It then has to be reworked. Which still requires water. And we, by taking old clothes, we sweep away this stage which is very energy-consuming for the environment. So we save a lot of water. Of course, a little water is needed for the production of the yarn, the cleaning of the yarn, and so on. But we don’t need to grow cotton again. That’s why we use less than five liters of water.

Feat-Y: Was it a necessity to orient your brand towards eco-responsible products?

A.L: Yes, because that’s what we exist in. It’s to show that another mode is possible.

Feat-Y: In terms of sales, so far, France represents what percentage of your turnover and to what extent does the current containment change the deal for your brand?

A.L: We remain a very small player in the fashion world, at the level of France. We launched the brand in November 2019 and the delivery of the first socks in February 2020. We underwent the first containment with the closure of the factories, we were not able to develop the company as we wanted. But since September we have been feeling the rise of Estampille and the craze and desire to consume better. In spite of the second containment we are moving forward!

Feat-Y: If you were a garment, what would you be?

A.L: I have to say socks (laughs)! Because socks are a product that is not very visible but can have a strong impact. A positive impact on the environment but also on style by choosing the right socks.

Feat-Y: If you were a work of art, what would you be?

A.L: It is a work of art but also a monument. I’m thinking of the Eiffel Tower, because we admire it from below, but it also allows us to admire all of Paris.

Feat-Y: If you were an inspiring character, who would it be?

A.L: I think it would be Will Smith because he’s a very inspiring person, who says that anyone can achieve what they want to achieve with hard work, self-confidence, determination. When you start, it takes a lot of determination.

Feat-Y: If you were one of the materials you recycle for your product line, which one would it be?

A.L: That’s a good question. I would say recycled nylon because I keep women’s legs warm in the winter.